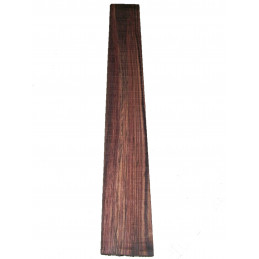 Walnut is the only North American dark wood.?Its heartwood varies from a purplish-brown with thin, dark veins to gray-brown and even orange-brown or?lighter pale brown to a dark chocolate brown with darker brown streaks. It can sometimes have a grey, purple, or reddish cast The narrow sapwood tends to be white.?Grain is usually straight, but can be irregular. Has a medium texture and moderate natural luster.??Sapwood is pale yellow-gray to nearly white. Figured grain patterns such as curl, crotch, and burl are also seen.?Under a gloss, the grain is very deep, thick and rich looking.

Glues, stains, and finishes well, (though walnut is rarely stained).?It is somewhat softer than Maple though stiffer than Mahogany.