Admired for its beautiful cream color fine texture, the grain is generally straight but also occurs as ?birds-eye,? ?curly,? and ?fiddleback? grain. Hard Maple?s beauty and strength makes it a favorite for wooden musical instrument makers.

Unlike most other hardwoods, the?sapwood?of Hard Maple lumber is most commonly used rather than its heartwood. Sapwood color ranges from nearly white, to an off-white cream color, sometimes with a reddish or golden hue. The heartwood tends to be a darker reddish brown.?Birdseye Maple?is a figure found most commonly in Hard Maple, though it?s also found less frequently in other species.

In tree form, Hard Maple is usually referred to as Sugar Maple, and is the tree most often tapped for maple syrup. Sugar Maple?s leaves typically have either 5 or 7 lobes with vivid autumn coloring ranging from yellow to purplish red.

Hard Maple ought to be considered the king of the?Acer genus. Its wood is stronger, stiffer, harder, and denser than all of the other species of Maple commercially available in lumber form. It?s also the?state tree?in four?different?states in the USA. 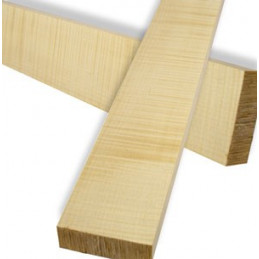